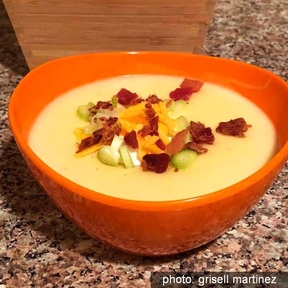 Put the broth or water, potatoes, onions, garlic, salt, pepper and red pepper flakes, if using, in the Instant Pot.

Close the lid and make sure the valve is set to Sealing. Push the Pressure Cook (or Manual) button and adjust time using the + and - buttons to get to 6 minutes. When it beeps that it's done, flip the valve from Sealing to Venting for a quick release and when the pin drops after a minute or so, remove the lid and hit Cancel.

If you want a smooth soup, puree it now with an immersion blender, regular blender or food processor. If you like it chunky, leave it as is or mash some of it with a potato masher and leave some potato lumps.

Set aside a couple of tablespoons of grated cheese for garnish and when the soup stops boiling, add the cheese and stir until melted.

Whisk in the cream and the sour cream. Save about one tablespoon of chives and the same amount of bacon for garnish and add the rest to the soup. Taste and add salt and pepper if desired. Garnish with a dollop of sour cream and a sprinkling of cheese, chives and bacon. Yum.