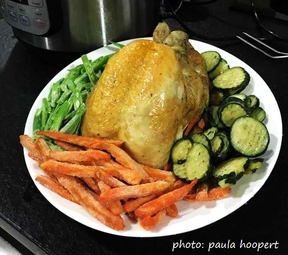 The idea of doing a whole chicken in less than an hour is what sold me on the Instant Pot. Then I made a cheesecake and forgot all about the chicken for three months. But oh my GOSH, this is SO good.

It produces tender, succulent meat and uber-flavorful gravy. You can even stuff it if you like. But don't add too much broth to the stuffing. It will be soggy. In the oven, moisture evaporates as it bakes. Not in the Instant Pot.

Use any herbs you like and any fruits or vegetables in the cavity.

Toss the apple and onion with the garlic, herbs and seasonings and shove these tasty little morsels in the cavity. (Optional: use a skewer to close the cavity.) You can also use lemon slices and rosemary or orange slices and raisins in the cavity – whatever you like.

Pat the chicken dry with paper towel and season it with salt and pepper or a spice rub of your choice. Tie the legs together with kitchen cord if you have it. This holds things together and gives you a handy “rope handle” for removing the chicken from the pot.

Press Saute and when the display says Hot, add the oil and swirl it to cover the bottom. Put the chicken in breast side down and brown it without moving for a few minutes. Turn and brown da boid (yeah... the chicken) on the other side.

Hit Cancel and transfer the chicken to a plate. Add the broth (and wine, if using) and scrape all the brown bits up off the bottom of the pot. I use a metal spatula for this but use a wooden spoon or whatever you have. Put the trivet in and return the chicken to the pot.

Close the lid and make sure the valve is set to Sealing. Push Pressure Cook (or Manual) and adjust time using the + and – buttons.

Walk away and have a cup of tea. When it beeps that it's done, leave it for 15 minutes natural release. (That beep is your cue to turn the oven on to Broil if you plan to brown it in the oven, but that's optional.)

After 15 minutes, flip the valve to Venting for a quick release and when the pin drops, open that puppy up and be amazed. Use some tongs and your little cord handle to lift the bird onto a foil-lined baking sheet if you're planning on browning it. Broil for a few minutes, watching closely to avoid burning. Or just  put it on a platter right out of the pot and cover loosely with foil.

If there is a lot of liquid in the Instant Pot (some chickens give up quite a bit of liquid), press Saute and let it boil and reduce to about 2 cups.

Stir the water and cornstarch until smooth. When the broth is boiling, add about half the cornstarch slurry. If it isn't thick enough for you, add a little more. Taste and add salt and pepper if needed.

THE MEAT! The meat is so tender and juicy. I wish I could buy my IP a present or some flowers or something. It has done so much for me and given me so much joy...and deliciousness.