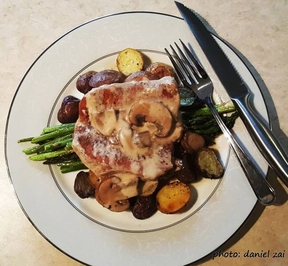 I know this sounds like a strange combination of ingredients. I get it. Cinnamon, mushroom soup and wine??? Trust me. It’s delicious.

** If you prefer not to use wine, replace the water and wine with 3/4 cup water and 2 Tbsp Apple Cider Vinegar. (But the wine REALLY makes the flavour in this recipe POP.)

Season pork chops well with salt and pepper. Hit the Saute button. Add the oil to the pan and swirl it to coat the bottom.

Brown 2 or 3 of the pork chops well on one side. Nice, rich brown, not just grey. Turn them and generously sprinkle the browned side with cinnamon. When the second side is nicely browned, transfer them to a plate and do the same for the remaining chops.

When all the chops are browned, add the butter and mushrooms to the pot. Stir and saute for a few minutes to brown and soften the mushrooms.

Add the wine and water (or water and apple cider vinegar) and thoroughly deglaze the pan: scrape every last bit of browned bits off the bottom of the pot. If you skip this step, the Instant Pot may interpret the stuck on bits as burning food. It will display the dreaded “Burn” notice and shut down.

Press Cancel and return the pork chops to the pot. Swish them around a bit to cover them with the liquid. Pour the mushroom soup on top of everything. Don't stir it in.

Close the lid and set the valve to Sealing. Push the Pressure Cook (or Manual) button. Adjust time using the + and - buttons to get to 1 minute.

Yes, ONE minute. When it beeps that it's done, just leave it alone for a 15-minute natural release. You must give it the whole 15 minutes NR.

While it releases, put your poor abandoned stove to use (it's been feeling SO neglected since you got your IP, right?) and make broad egg noodles the old-fashioned way. Or, if you have a second IP, cook the noodles in a couple of cups of water or broth for 4 minutes with a quick release. Drain any excess water.

Transfer the pork chops to a plate and whisk the sauce in the pot if there are any lumps of soup. If it’s too thin, hit Saute and reduce it for a couple of minutes to a silky sauce consistency.

I've converted this recipe from an old family favourite of ours. And it did NOT disappoint. The sauce is particularly good over egg noodles but also good with rice or mashed potatoes. Hope you love it.