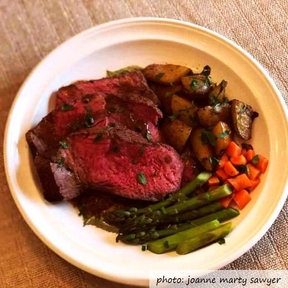 Rare roast beef in the Instant Pot??? YES! This is not for a pot roast cut like chuck or blade roast. This is for a cut you would ordinarily roast in the oven.

The key to success with this roast is its shape. If you have a round roast, you'll have the best luck. A long, narrow roast, although it may weigh the same, will be more done than a thicker one. Reduce the cook time or the natural release time for thinner cuts. Then check the internal temperature.

I have done this with a roast as small as 2 pounds. It was only about 1 ¾ inches thick. So I followed this method, browned it first and cooked it under pressure for only 2 minutes. I started checking the internal temperature after a 10-minutes natural release. I closed the pot again and at 13 minutes, it was 125 degrees - perfect medium-rare. So play with it a bit. It does work.

Season the roast generously with salt (unless you have brined it – it has enough salt) and pepper. Hit the Saute button and when the display says Hot, add the oil. Brown the roast on all sides. Brown. Not grey. If you want a nice rich, beefy flavour, brown that meat.

Transfer the roast to a plate. Deglaze the pot: add the broth and/or wine and the Worcestershire and soy sauce to the pot. Scrape all the browned bits off the bottom and into the liquid. Add the garlic and any herbs you like, rosemary, basil, thyme. Put the trivet in and the roast on the trivet.

Close the lid and make sure the valve is set to Sealing. Push the Pressure Cook (or Manual) button and adjust the time using the + and - buttons to get to 3 minutes. That's not a typo. THREE minutes. When it beeps that it's done, leave it for 20-50 minutes natural release (on Keep Warm).

You will use an instant-read thermometer for this roast. Open the pot after the minimum time and check the temperature with your thermometer. If it's not quite there, close the pot for another 5 minutes or so. The residual heat will continue to cook the roast.

The key is the natural release time and it depends on the size and shape of your roast and the degree of doneness you desire. For a 3-pound rare roast, start checking after 20 minutes natural release. For a 4 pounder, leave it for a little longer, but start checking after 30 minutes. For a 4 lb roast that is longer and thinner rather than round and thick, check it after 20 minutes. It's not just the weight that counts, it's the thickness of the meat.

When it’s done to your satisfaction, transfer the roast to a plate and cover with tin foil while you make the gravy. If you want to brown and crisp the outside of the roast, let it rest for 5 - 10 minutes on the counter, then pop it in a 500-degree oven for a few minutes. Resting it first is important. If you take it out of the pot and put it directly into the oven, it will continue to cook and will be overdone.

Whisk together the flour and water until completely smooth. Remove the trivet and hit the Saute button. When it's boiling, add about half the flour/water slurry to thicken. If you want it thicker, add a little more. Add salt and pepper to taste. And do yourself a favour….. make Yorkshire Pudding.