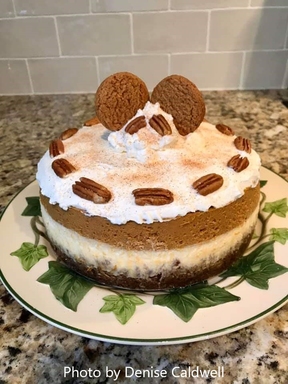 A layer of cheesecake topped with a layer of classic pumpkin pie — the best of both worlds.

The recipe and cook times are for a 7” cheesecake pan. Adjusted times for other pans are included below. Don't line the side of the pan with parchment paper. It buckles and mars the edge. No need to cover it with foil before cooking, either. This is a very simple recipe.

**Important: Warm the cream cheese. Trust me on this. Put the wrapped cream cheese in a ziplock bag, but don't seal it. Push it into a sink or bowl full of hot tap water to force the air out and THEN seal it. Weight it down with a plate for about 15 minutes. It will be very soft and easy to blend.

I use a 7" Fat Daddio push pan and I love it. But any cheesecake pan will do. Lining the bottom with parchment is optional. Spray it with baking spray if you prefer. And don't press the crust in too firmly. It will be easier to serve if you use a gentle touch.

CRUST: Mix ingredients with a fork and gently press it in the bottom of the pan and up the sides a bit if you like. Put it in the freezer or if you prefer, bake it at 350 for 9 minutes, then cool completely.

CHEESECAKE LAYER: Mix all ingredients except the egg until completely smooth. Add the egg and beat on low speed until just incorporated. Do not overbeat once the egg is in. Pour the filling into the crust.

PUMPKIN PIE LAYER: Beat together everything except the crystallized ginger, if using. Yup. All at once. Easy, huh? Add the candied ginger now if you like, saving a bit for decorating. Pour this gently over the cheesecake layer. I pour it over the back of a spoon so it doesn't disturb the cheesecake mixture too much.

Put 1 cup water and the trivet into the IP. Place the cheesecake on the trivet, close the lid and set the valve to Sealing. Hit Pressure Cook (or Manual) and use the + and – buttons to get to 35 minutes for a 7-inch pan.

For 2 times the recipe:

When it beeps that it's done, leave it for a 15-minutes Natural Release. Then flip the valve to Venting for a Quick Release. When the pin drops, take out the cheesecake. Gently blot any condensation off the surface with paper towel. Leave it to cool on the counter for an hour or so. Then cover the cheesecake and refrigerate it in the pan for at least 4 hours, preferably overnight.

TOPPING: Beat the heavy cream with the powdered sugar and vanilla until stiff peaks form. Pipe or spread over the top and decorate with a sprinkle of cinnamon sugar or some chopped candied ginger.

To serve, run a knife around the edge to release it from the ring. If you use a push pan, set it on a peanut butter jar or a can of tomatoes and pull the ring straight down. Voila. Perfect cheesecake.

If you have difficulty getting it off the bottom of the pan, run a dish towel under piping hot water and wring it out. Fold it on the counter and set the cheesecake pan on it for 15-30 seconds. The butter in the crust will soften, making it much easier to remove.

That's it. My mom's pumpkin pie recipe combined with my own cheesecake. Heaven.