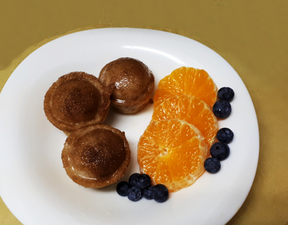 Separate the egg and whip the white with the 2 tsp sugar until stiff peaks form. Set this aside for now. Whisk the flour, 2 Tbsp sugar, baking powder, baking soda, cinnamon and salt.

Beat the egg yolk and add the milk, vinegar, vanilla and melted butter.

BY HAND: Add the dry ingredients and stir just until combined. A few lumps are fine. If you do this in a mixer, you may end up with tough or dense hockey pucks instead of light and fluffy churro bites. Fold in the whipped egg white until just barely incorporated.

Put the egg mold on the trivet and spray it with baking spray. Fill each pocket almost to the top. Do not cover with foil or parchment - they need room to rise. Add 1 1/2 cups water to the Instant Pot and lower the trivet and egg mold into it.

Close the pot and set the valve to Sealing. Push Pressure Cook (or Manual) and adjust time using the + or - button to get to 9 minutes. When it beeps that it's done, leave it for 5 minutes natural release.

Optional: While they are cooking, melt the last 2 Tbsp butter. Stir the sugar and cinnamon together.

When the natural release time is up, flip the valve to Venting and when the pin drops, remove the churro bites. If there's any condensation on the mold, blot it off with paper towel. Invert a plate over the mold and turn the whole thing upside down to release all the treats.